The Shape of New Beginnings 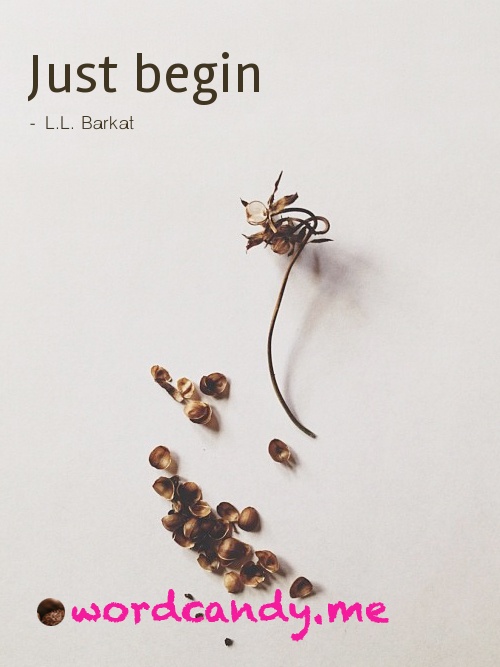 I’ve been asking God how He wants to shape me for this new year. Not a resolution. Not a goal. But a clarifying of who I am to be, how I am to become. I’ve been listening for His response, waiting to hear.

As Advent turned to Christmas, as December moved towards January, I’ve journaled, imagined, even read some of those end-of-the-year evaluative thought-provoking questions. I’d imagined it would be a hint of what’s in store for the year ahead, my part in His story. I really wanted to know before the year changed from old to new.

Seeking His shaping for me, the silence continued. Even on the last day of the year, the silence was unbroken.

Finally, on the last day before one year became the next, His shape for me became quite clear.

Emerging from the library, a lanky father held open the door for his gangly daughter. She glanced up at him. I was too far away to hear their words.

He grinned. She leaned in. He tousled her hair. She hugged him tightly as she smiled. They clearly exchanged tender, humorous words.

Again he spoke, an invitation, so it seemed, for she nodded. They took off running across the sidewalk.

Their gallop of joy, him setting the pace, her keeping up at times, then lagging behind, or playfully darting ahead, had all the antics of two schoolchildren delighting in a frivolous moment together.

Continually, the father’s eyes are upon the daughter. The majority of the time her eyes track his, boldly confident in this love relationship. They race onward, his overcoat flapping, her scarf like a kite trailing up into the sky, their cheeks rosy in the brisk mountain air.

His strides, long and sure, could easily outpace her younger, shorter ones. He sprints, challenging her to stretch forward. She rises to the challenge. The, she lags behind, distracted, discouraged, a bit undisciplined and lazy.

It doesn’t stop him. He’s still running forward full force, yet always cheering her on as he looks back over his shoulder, waving her towards him. She surges towards him. He ambles alongside her.  She drops to a walk. He stops and waits, jogging in place. She laughs then springs forward in quick pursuit, hugging him when she’s near.

A good father offers invitations. A good daughter trustingly accepts, most of the time.

Adored. Beloved. Cherished. Delighted over. Encouraged. He gives. She receives. She gives. He receives.

There it was: the shape of what my good heavenly Father, my Abba, wants for me in the year ahead. No resolution. No goal. No new calling. No expansion of present callings.

He wants me to be shaped by this knowing beyond knowing that I am tenderly and tenacious:

He invites me onward. I lean into Him.

He gazes lovingly, challenging me to go and be likewise.

Delighted over, I delight.

So that’s the shape God wants for me:  a daughter who is ever leaning in, feeling my Father’s tender adoration, following Him into the gallop of joy, into the challenge of a little more than I think I can handle. He’s not going anywhere without me. Why would I go anywhere without Him?

I’m accepting His invitation to be shaped by this wildly vast love. He’s quite something marvelous, this Tender and Tenacious heavenly Father of mine.

How about you? How does God want to shape you as this year unfolds?